Home
>
Blog
>
Energy Deregulation: Everything You Need to Know

Energy Deregulation: Everything You Need to Know

Learn how energy deregulation works, which states are deregulated, and how you can save money by shopping energy plans.

What is Energy Deregulation?

Simply put, energy deregulation is very similar to other utilities – from a mobile phone plan to internet service – and gives consumers (homeowners, renters, small business owners, business leaders) the ability to shop and choose the right energy supplier and rate for their needs.

What States Have Deregulated Energy Markets? 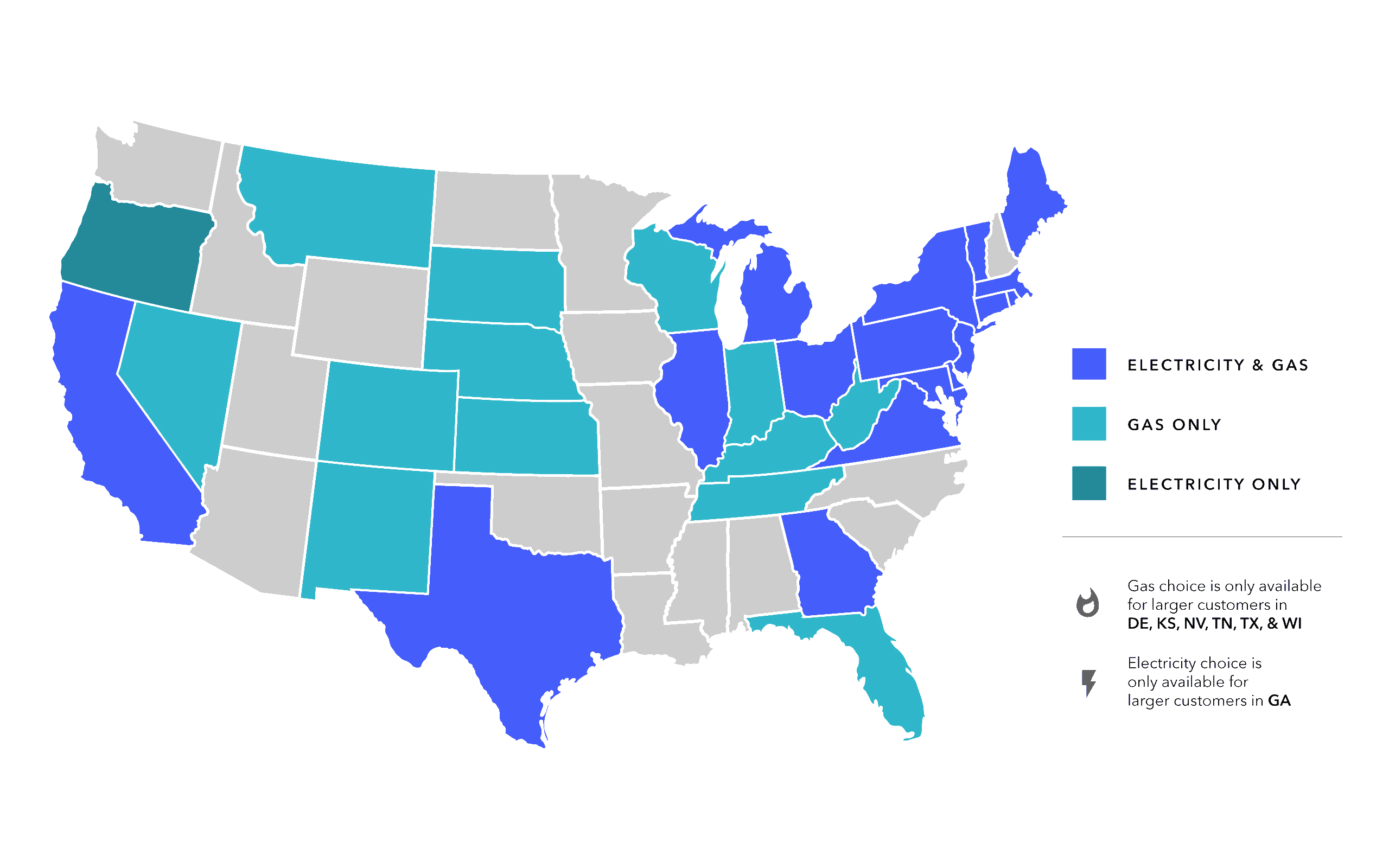 In the last 30-40 years, over 20 U.S. states have deregulated their energy markets, starting with natural gas in the 1970’s.

In 1992 the energy policy act removed many of the barriers for electricity competition, but since then only 16 states have deregulated their electricity markets: Connecticut, Delaware, Illinois, Maine, Maryland, Massachusetts, Michigan, New Hampshire, New Jersey, New York, Ohio, Oregon, Pennsylvania, Rhode Island, and Texas and the District of Columbia.

The main goal of energy market deregulation is to create competition among energy suppliers to keep prices as low as possible. It also gives both residential and business consumers the ability to choose their energy supplier and energy rate.

To make sure that you are selecting the best energy plan and getting the best rate available, it’s important to understand exactly how energy market deregulation works.

Energy market deregulation began in the 1970’s with The Public Utilities Regulatory Policies Act, known as PURPA.  In the midst of the 1970’s energy crisis, leading economists predicted that oil would rise to $100 a barrel and cripple industrial world economies. PURPA was passed to promote alternative energy sources, tout energy efficiency, and diversify the electric power industry while also reduce dependency on foreign oil.

The Energy Policy Act (EPA) was passed to allow business and residential customers to choose their electricity supplier.

The EPA was a watershed event that lead to the restructuring of the U.S. power market. In a nutshell, the EPA separated energy suppliers from energy utilities, meaning that companies could not be both. To add, utility companies would continue to be regulated as a natural monopoly.

What Does It Mean For You?

If you are in a deregulated market, you now have the power to choose your electricity supplier and your rate. To compete, energy suppliers are forced to be more efficient, as well as offer customer-centric plans with competitive rates.

Now that consumers have the “power to choose”, they are still faced with a daunting task. In each specific zip code, today’s consumer may have over 20 different energy suppliers to choose from. And although the intended result of deregulation was to lower prices for consumers, it’s not that simple. In many cases, energy suppliers offer energy plans that are confusing and supported by legalese that mitigates their risk.

Consumers must take the time to conduct research on suppliers in their areas, compare rates, and most importantly, read the fine print before signing a contract. Fortunately, there are many new online websites to help consumers make sense of it all.

‍Energy prices are based on supply and demand.

In deregulated energy markets, energy rates usually follow the basic law of supply and demand. For example, during the summer when there is more energy usage, rates are higher. In regulated markets, energy suppliers and utilities must lobby their respective state legislature to raise rates on consumers.

You save by shopping around.

Many consumers do not understand how the energy markets work and unfortunately, energy suppliers may take advantage of the complexity of the industry to raise rates and pad their margins. For example, energy rates change every day based on a myriad of factors.

The best strategy is to shop for an energy plan in the same way that consumers shop for a home mortgage –– learn how rates work, compare rates each day, talk to a number of different companies, ask good questions, and be confident before you sign a contract. The Small Business Administration research shows that most businesses (based on business type and monthly energy usage) can save hundreds, or even thousands of dollars per year, by shopping for a better energy plan each and every year.

Why Should You Care?

The average person overpay for electricity by 20%

Although finding the best energy plan for your home or business may be time-consuming and even a challenge to get a true “apples to apples” comparison, it’s worth the time and effort. Your energy rate is based on “cents per kWh.” Even though it may not seem like a big difference, a few cents over a 12-month or 24-month contract can really add up.

Many consumers don’t have the time or simply don’t want to learn how the energy industry works so they rely on energy brokers to source the best rate for them. It’s important to know that energy brokers may promise you the best rate in the market yet often they will tack on their own fees and sell your contract to the highest bidder (aka energy supplier).

Energy brokers are focused on maximizing their profit margin and may sell you a contract that’s good for them...not for you.

We recommend conducting your own online research and using online tools to make your own decision. It’s much like booking a flight – we don’t call travel agents anymore, so why would you use an energy broker when you can do it yourself.

Most business owners are focused on cutting costs and maximizing profit. By taking the time to research and comparing electricity suppliers and rates, you can cut costs on energy usage and save your business thousands of dollars each year. Remember, it’s your money. So keep it.

Does Closing Vents in Unused Rooms Help Save Energy?

Learn why closing AC vents may be a bad idea.
February 2023

Learn how nuclear energy stacks up to other renewable and non-renewable types of energy generation.
February 2023