If you find yourself traveling through the Texas countryside, you might notice tall, white, imposing structures dotting the Lone Star plains. These wind turbines — which reach the same height as a 20-story building — make Texas the most prolific wind energy destination in the U.S.

While Texas is known for its oil, the Lone Star State actually produces 28% of all wind energy in the United States. That makes Texas the biggest wind energy producer in the U.S., and fifth-largest contributor in the world.

A perfect storm of factors made Texas the ideal place for these windmill farms, which include the following:

These unique components make the great state of Texas the perfect location for America’s wind farms. In fact, the Lone Star States leads the list of the top states with the most wind capacity installed at 10.929 megawatt (MW). Learn more about the 5 biggest wind farms in Texas below.

The 5 Biggest Wind Farms in Texas 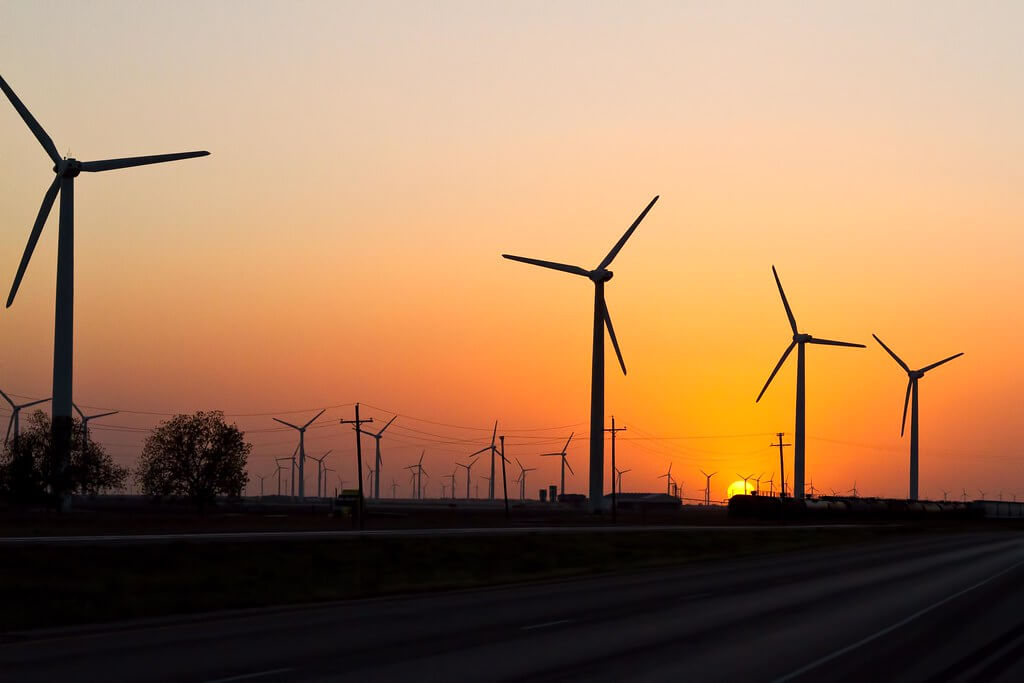 Based in Nolan County, Texas, the Sweetwater Wind Farm started operating in 2007. Construction on the farm actually started in 2003, making Sweetwater one of the oldest wind farms in the US.

Boasting 392 turbines manufactured by GE Energy, Siemens, and Mitsubishi, stretching over 144 square miles of West Texas, Sweetwater was the biggest wind farm in Texas — and in the world — when it was built. This paved the way for larger, more innovative wind farms across the Texas landscape. Today, this 585.3-megawatt wind farm supplies energy to Austin and San Antonio.

Roscoe Wind Farm is located outside Abilene, Texas, but it sprawls across four counties and 100,000 acres of cotton country. Owned by German company RWE Renewables, Roscoe opened in 2009 and was the largest wind farm in the world at that time. The wind farm uses 627 turbines with an installed capacity of 781.5 MW to generate enough power for over 260,000 homes, making it one of the biggest wind farms in Texas.

“Los Vientos” is Spanish for “the winds,” and that’s precisely what this wind farm is known for. While most wind farms are located in North Texas, Los Vientos is situated in South Texas’ Starr County.

Construction began on Los Vientos in 2012 and was completed in August 2016. This plant features 400 turbines and generates enough power for 120,000 homes while supplying energy to cities like Garland, Greenville, and Bryan.

Completed in 2006, Horse Hollow spans 47,000 acres across Taylor and Nolan Counties in Texas. At the time, Horse Hollow was considered the largest wind farm in the world with 421 turbines.

However, that’s not what made Horse Hollow famous. It has the infamous distinction of the world’s first nuisance lawsuits over wind farms. Residents complained about the appearance and noise of the Horse Hollow turbines, but judges sided with the wind farm in each lawsuit.

Capricorn Ridge Wind Farm sprawls between Coke and Sterling Counties. First started in 2008, this was the first wind farm in the U.S. to fund the project with carbon offsets, which involves reducing carbon dioxide emissions or other greenhouse gases sa compensation for emissions made elsewhere. Capricorn Ridge Wind Farm provides enough energy for 220,000 homes, preventing over 160,000 tons of greenhouse gas emissions.

Other Wind Farm Initiatives in Texas

The Biggest Wind Farms In Texas Might Power Your Home Soon

The Lone Star State isn’t known just for its vast oil fields; it’s the site of the modern energy revolution. Texas produced 28% of all wind energy in the US in 2019 — a number that’s projected to grow even more as we build more turbines and perfect the technology. While non-renewable energy like coal is still big in the U.S., it’s clear that renewables have a very bright future.

Curious where your energy is coming from? Choose the right utility company for your home or business. Shop around to find the best deals on energy in your area with EnergyBot.

Learn how nuclear energy stacks up to other renewable and non-renewable types of energy generation.
January 2023